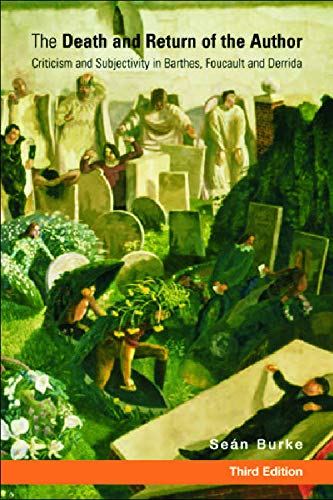 The Death and Return of the Author: Criticism and Subjectivity in Barthes, Foucault, and Derrida

For the late twentieth century, the death of the author assumed a significance analogous to the death of God one hundred years previously. In this now classic study, Sean Burke both provides the first detailed explanation of anti-authorialism and shows how, even taken on its own terms, the attempt to abolish the author is philosophically untenable. Rather than developing a traditionally humanist defence, Burke effectively out-theorises theory through rigorous readings which demonstrate that the concept of the author remained profoundly active even and especially as its disappearance was being articulated. The question of the author, he argues, is not a question within theory but the question of theory. Building on a substantially revised second edition, Burke further explores the challenges faced by an authorial theory that is 'still to come'. Prompted by the responses to the passing of Jacques Derrida in 2004, he revisits the enigmatic borderlines between life and work, life and (authorial) death.Features of the third edition: *A 5,000-word Preface which considers Derrida's legacy and the future of authorial theory *Two new chapters which submit the biographical and autobiographical to independent theoretical scrutiny *A fully updated bibliography

Preface to Third Edition: The 'Life Death' of the Author Preface to the Second Edition Prologue: The Deaths of Paul de Man Introduction: A Prehistory of the Death of the Author 1. The Birth of the Reader: Authorship and Apotheosis From Work to Life The 'Founders of Languages' Mimesis and the Author Autobiographies 2. The Author and the Death of Man: Cogito and the Birth of Man The Founder of Futurity What (and Who) is an Author? Allegories of Misreading Transcendental Lures: LAcan and the Mastery of Language Subjectivities 3. Misread Intentions: Authors of Absence Hors-Texte A History of Silence Doubling the Text: Intention and its Other The Myth of Writing Reading and (Self-) Writing Conclusion: Critic and Author: Critic and Author? Misreceptions: Phenomenology into Deconstruction The Ghost in the Machine: Authorial Inscription and the Limits of Theory Epilogue: Technology and the Politics of Reading 'Half Dust, Half Deity': The Middle Way of Situated Authorship Appendix 1: The Biographical Imperative Appendix 2: The Author as Reader Notes Bibliography Index.