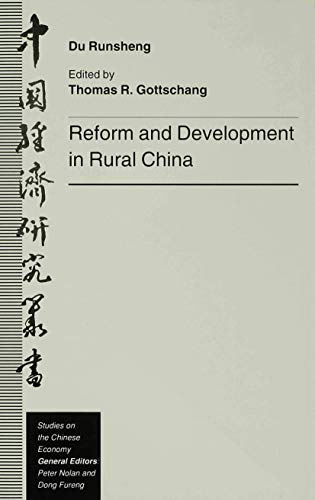 Reform and Development in Rural China (Studies on the Chinese Economy)

The 19 speechs in this volume explain many aspects of China's market-based rural economic reforms. They were delivered primarily to groups of government or Party officials by Du Runsheng, director of the Rural Development Research Center (RDRC) of China's State Council for much of the 1980s. The book includes an introductory chapter describing the history of rural economic policy in the People's Republic of China, notes by Du Runsheng and a glossary of important Marxist and Chinese economic terms.

Preface - Introduction T.R.Gottschang - Agricultural Collectivization in China: Past and Present - Develop the Rural Commodity Economy - The Production Contract System is a New Development of the Rural Cooperative Economy - Rural Enterprises must Develop Further - The Direction of Technological Transformation in Chinese Agriculture - Specialization and Commercialization in Rural Production - Social Goals Related to Development of the Rural Commodity Economy - Expand the Market Regulation of Agricultural Products - Intriguing Prospects for Research on Chinese Rural Problems - The Grain Problem - Rich First, Rich Later, and Prosperous All Together - Rely on Science and Technology to Strengthen the Economic Position of Agriculture - Water Control Work must Stress Economic Benefits - Placing Agriculture in its Proper Position in the National Economy and Raising Rural Incomes - Strive for Stable Growth of the Rural Economy - Embark upon the Path of Striving for Economic Benefits through Reform - Reform and Development in Stock-Raising Areas - Discussion of an Outward-Oriented Development Strategy for the Coastal Areas - Reflections on the Development of Rural Cooperatives - Glossary